The effort over the years in reducing the energy consumption of the transponders, by optimizing the architecture, process technology and RF protocol, is being repaid by an emergent concept, that is, the low-power devices can be powered by means of ambient Energy Harvesting (EH). The energy harvesting concept comes at a time when the “compromise point” between energy consumed and harvested may be achieved.
Energy harvesting may be defined as the conversion process of ambient energy into electrical energy. Radiant (solar, infrared, radiofrequency), thermal, mechanical and biochemical are examples of the ambient energy that surrounds us and thus potential candidates for energy harvesting sources, as described in Fig. 1. Energy harvesting or scavenging becomes an interesting environmental friendly solution regarding the devices batteries. Even if long-life batteries will still be unavoidable, as technologies mature, energy harvesting is creating some shift in battery usage from primary to rechargeable batteries. However, the biggest potential of energy harvesting is creating a new class of electronic devices that do not need battery, i.e., battery-less, as they are completely powered by ambient sources. Thus, at same time the device cost is clearly reduced and an alternative is provided for the battery discarding problem. In order to understand what is the useful amount of harvested power, and therefore what level of energy could be harvested depending on the energy source and hence how the battery run time works for different classes of electronics, Fig. 1 gives a description of these different points. 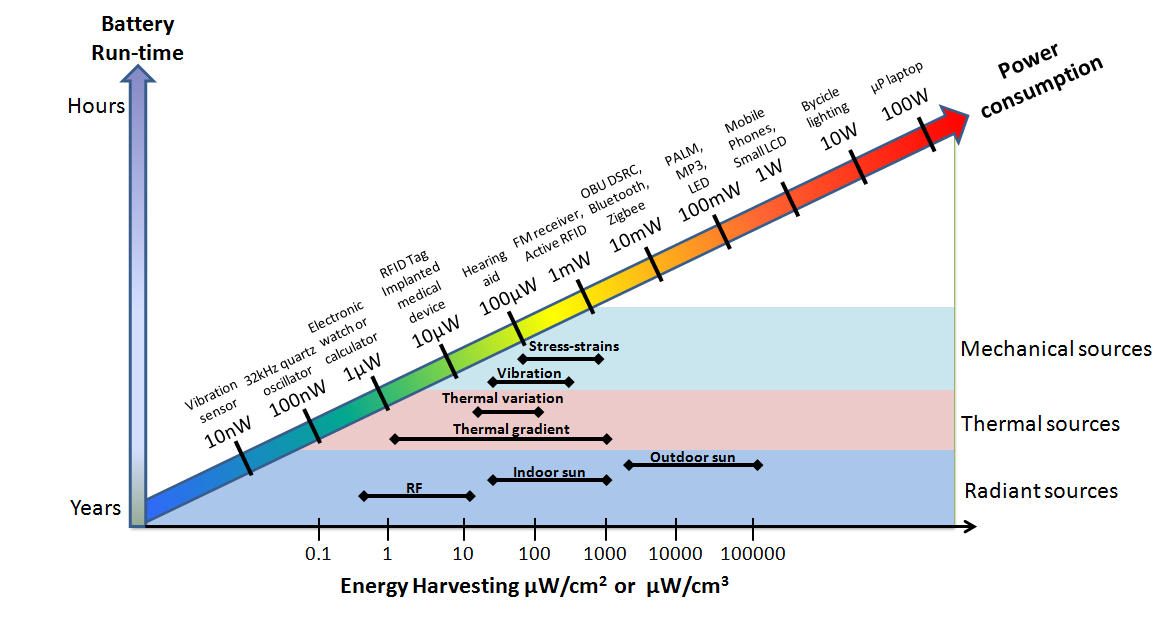 In Fig. 1, depending on the application, a specific(s) energy harvesting source(s) is/are more appropriate than another one. The comparison of the different ambient energy sources is presented as a function of the available power density for each source, i.e., how much power density is available before conversion into electric energy, based on conversion efficiency. Providing a comparison of different energy harvesting sources implies a normalization of the power density units (µW/cm2 or µW/cm3).

From Fig. 1, an interesting point may be observed; the energy harvesting comes at a time when the electric power consumption of the modern devices is being reduced, i.e., the “compromise point” between energy consumed and harvested may be achieved.
From Fig. 1, the outdoor sun is clearly the most powerful source in terms of power density available, however, the conversion efficiency is an important factor and solar panels still present low values. Moreover, solar energy is available just a few times during a day ~12h, if it is a sunny day on the Equatorial line. Thermal energy needs a high constant temperature gradient to provide correct conversion efficiency. Vibration energy needs a specific and constant vibration frequency to have good conversion efficiency. Finally, among all the energy sources, RF comes as an interesting candidate to provide energy to low-power electronic devices, since the system can operate 24h a day and high conversion efficiency values can be achieved.

This paper presents a different approach for a highly efficient Wireless Energy Harvesting (WEH) device design at 2.45 GHz for low-power density (µW/cm2) applications. Therefore, the high-efficiency rectifier was designed, in order to evaluate its harvesting performances; the rectifier was connected to a classical antenna and the energy harvesting characterization was performed. A correct model of a Schottky diode is necessary despite the nonlinear behavior. To increase the conversion efficiency an electromagnetic resonant phenomenon is proposed.  To validate this method, we developed a rectifier circuit capable of recovering signals at 2.45 GHz with a high RF-DC efficiency conversion.  For a low-power density of 1.3 µW/cm2, the rectifier presents a maximum conversion efficiency of 70% and when connected to an antenna of 43%.